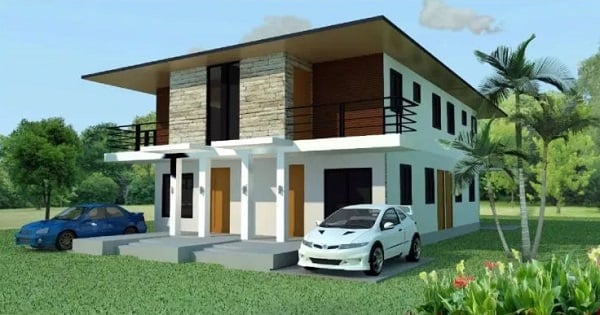 Experience a new tropical Asian-inspired community in the heart of San Pablo City, Laguna, the land of the seven lakes.

Introducing the Sannera San Pablo by Ovialand, a house and lot property development for sale in Laguna that is nestled in the foothills of three legendary mountains of Southern Tagalog (CALABARZON region), which are the Mt. Banahaw, Mt. Makiling, and the Sierra Madre Mountains.

These typical landform surrounding the city make the environment cooler than any other location southeast of Manila. The cooler climate adds up to cleaner air and the refreshing ambiance suitable for the whole family. Furthermore, the Sannera San Pablo sits on a 5.2-hectare prime property covered in lush green with modern tropical Asian design on which 55% of the total land area is dedicated to wide open spaces, community amenities, and other nature-infused features that will preserve the natural beauty on which the city is known for. This residential development offers only 340 house and lot units that features the signature Ovialand Home Design Series of quality houses. Choose among the Ovialand’s 2-story Single Detached Units, the 2-story Quad Units, and the 2-story Stand Alone Units.

The Sannera San Pablo is specifically located along the Maharlika Highway (or the Pan-Philippine Highway), Brgy. San Antonio II, San Pablo City, Laguna. This location is just a few kilometers away from San Pablo City proper (to the northwest) and less than 2km away (to the south) from Villa Escudero Plantations and Resorts in the town of Tiaong, Quezon Province. Farther east is the industrial town of Candelaria, Quezon, where there are desiccated coconut factories and other coconut-based manufacturing plants that offer sustainable and long-lasting employment for professionals and highly skilled individuals. San Pablo City itself is a first class component city in Laguna where there are various tourists attractions (like the seven crater lakes that are scattered around the city and the famous Villa Escudero Plantation Resorts where half of the 415 hectares is located in San Pablo) and other Eco-tourism destinations.

The SM City San Pablo is also in close proximity from the Sannera San Pablo while several showrooms and parts/servicing of Honda Cars, Isuzu, Ford, Hyundai, Nissan, and Mitsubishi, can be found along the Maharlika Highway in this city. San Pablo City is also the educational and learning center of Laguna on its southern border. Some of the top-notch schools that could be found in San Pablo City include San Pablo Colleges, STI College San Pablo, Laguna College, Laguna State Polytechnic University, Canossa College, MSC Institute of Technology, Liceo De San Pablo, and the Capellan Institute of Technology, among others. Furthermore, most of the first class hospitals are found within the city proper, like the San Pablo City Doctors Hospital, San Pablo Colleges Medical Center, and San Pablo City Community Hospital; while the Peter Paul Philippine Corp. Medical Center and the United Candelaria Doctors Medical Center, both in Candelaria, Quezon, are a mere 20 minutes away. The city also hosts the coconut products manufacturer Franklin Baker Company that employs more than 1,200 of the city’s local people.

The Sannera San Pablo offers some of the industry’s most talked about house units which fortunately are the product of Ovialand’s Home Design Series. This house and lot community development in San Pablo City is admired as one of the country’s well-designed residential developments having a price range that can compete even with socialized housing but with much larger and more extensive home improvements.

Here are some of the specifications and other info about the house units being offered in the Sannera San Pablo:

Ovialand Sannera San Pablo in San Pablo City, Philippines is a premier House & Lot project available for sale. If you're looking to rent or purchase Sannera San Pablo, then check here first. We have full details of Sannera San Pablo updated regularly as well as everything you need to know about the availing and booking process, broken down into stages that includes selecting a unit, choosing a payment plan and buying your dream home at the right price. For price list, free site tripping or showroom visit, personalized service, model house, unit plans, floor plans, payment terms, CHAT LIVE with an agent 24x7. Always only buy from PRC licensed Real Estate Brokers and Agents.

Why Invest In  Sannera San Pablo

While you enjoy the tropical but cooler breeze of living at the Sannera San Pablo, be amazed of the project’s intimate recreational amenities inspired by nature’s fascinating wonders which you could see and feel every day. The project boasts of the serene environment very different from your every day life in the metropolis where burning concrete and humid asphalt are the daily way of life. In contrast with the Sannera San Pablo where the only concreted pathways are wide and the well-lit roads within the subdivision and the only noises are the birds’ chirping and twitting. Your new home in the countryside has a multipurpose clubhouse where there is a basketball half-court where your family and friends could play anytime you want. There is a function hall that could host family events, a swimming pool, convertible one-of-a-kind sports and recreational court, mini soccer field, fully landscaped pocket gardens, full perimeter fence, entrance and exit gates with guardhouses and 24/7 security, and other worthy amenities and facilities similar to those of the Terrazza De Sto. Tomas. Cleverly, you are treated to an inspiring resort-style living at the Sannera San Pablo on a daily basis and not only just during family vacations.

The Sannera San Pablo was launched on site on April 21, 2017. A week later, the company was able to secure a license to sell certificate from the office of the HLURB (Housing and Land Use Regulatory Board). From then on, the price for each house and lot unit has been increasing in small increment as the company starts to develop the place as more and more investors are placing their reservations knowing the price could go up steeply any time during the course of the construction. This is your ultimate chance to secure your reservation while the price is still slightly higher than its introductory level. You can have a brief chat or you may ask our ever reliable team of licensed real estate agents on this website on how to make a reservation.

At the Sannera San Pablo, expect a tremendous property appreciation in just a short period of time as this real estate development is counted as a “high-value target” for growth. Executives and researchers at Ovialand had concluded that San Pablo City is experiencing strong economic growth where “there is a new generation of successful businessmen, OFWs, and professionals from the area that are seeking the premier lifestyle they deserve while they strive daily for success”. With this observation, you will be one among the fortunate investors that could qualify for a more reliable and higher return on investment while you can sit and relax waiting for your venture to grow tremendously without you having to add another cost in the course of your payment. As Fatima Olivares-Vital, Ovialand’s business unit head had said during the site’s inauguration, “That is the added value that we are giving them, aside from the value-for-money investment we are giving them, we also want to make sure that they can sit and relax while enjoying their wise investment.”

Ovialand is the real estate developer of the future

After the success of the Terrazza De Sto. Tomas in Batangas, this next development by Ovialand in San Pablo City is touted to be the next paradise destination in Southern Tagalog. The Sannera San Pablo is the company’s latest residential development in known cities throughout the CALABARZON region which further boosts the company’s standing as the premier real estate developer this side of Luzon and south of Manila. The other property that Ovialand had completed and is mostly sold out in the past years include The Vermont Place Calamba, aside from the Terrazza De Sto. Tomas in Batangas. As the company has stated on their website, “We understand that each purchase of a house and lot is a milestone, and we are committed into turning this milestone into a memorable and pleasant experience that will be a preview of your happy memories and memorable new life in our projects”. What more could you expect in a real state company that delivers and builds communities right in your own neighborhood so you could upgrade to more convenient living without the high price tag? Ovialand is really worth your trust and investment."